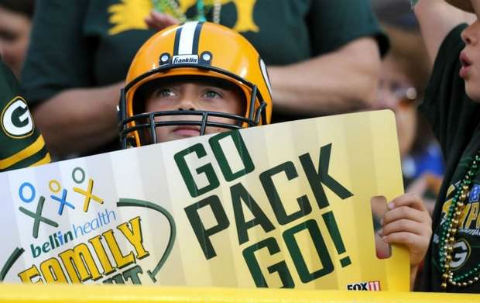 The Green Bay Packers held a glorified practice at Lambeau Field last night, called it Family Night and charged people to watch it. A bunch of you went — around 50,000 people showed up.

Thankfully, we were not among them.

If there’s anything that can be learned from an event like this, other than that there are a lot of suckers in the Green Bay area, then here’s what we think we learned. And no, I’m not trying to channel Peter King. He is the hack of hacks.

Let’s get the obvious out of the way first. The No. 2 units had no chance against the No. 1 units, so we’re not going to bother talking about that.

The players that stood out the most were on defense.

Defensive end Jerel Worthy, who hasn’t been nearly as active in training camp as we’d hoped, was definitely active last night. He stuffed Brandon Saine on a running play and put steady pressure on the quarterback.

Linebacker Jamari Lattimore was also impressive. Lattimore, who made the roster as an undrafted player last season and moved from outside to inside linebacker this season, looks to be developing into a solid backup at the position. Not only did starter Desmond Bishop single him out for his play during the game, but everyone else seemed to notice what he did too. Lattimore snuffed out several runs during the scrimmage.

Finally, while first-round pick Nick Perry is struggling to make the switch from defensive end to outside linebacker, undrafted rookie Dezman Moses is not. Moses stepped in for Clay Matthews last night and the Packers defense hardly missed a beat. Moses downright abused seventh-round pick Andrew Datko. It now seems more than likely Moses will find himself a spot on the final roster. We’re not making comparisons, but remember — James Harrison was undrafted and he’s been pretty successful as a 3-4 outside linebacker at the NFL level.

Previous Article
Tramon Williams Is Back!
Next Article
Bears Are Going to the Super Bowl!