Packers Are Going to Run Out of Money 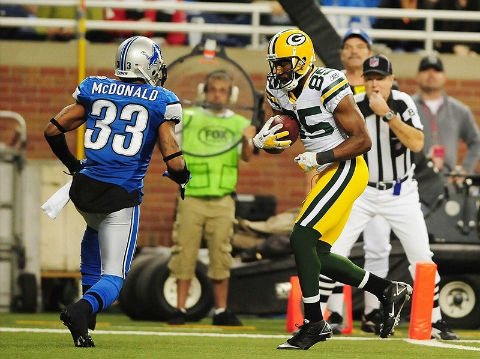 The Green Bay Packers have signed two veterans — T.J. Lang and Tim Masthay — to contract extensions this summer and they still have several to work on. That situation prompted one unnamed league such-and-such to say the Packers are going to run out of salary cap space.

“They still have to do Jennings, the nose tackle, the outside linebacker and the quarterback,” a league source said. “At some point, they’re going to run out of money.”

There’s some truth to that statement, although we don’t know about the running out of money part.

Receiver Greg Jennings is scheduled to be a free agent after the season and appears to be the Packers No. 1 priority at this point. Jennings probably wants to be paid among the top receivers in the game, which means he’s going to cost the Packers $10-plus million per season. Jennings currently counts $7.3 million against the salary cap.

Then there’s quarterback Aaron Rodgers, who’s grossly underpaid when his production is compared to that of his peers. Drew Brees set the bar by signing a five-year, $100 million deal with $40 million guaranteed this offseason. Rodgers is signed through 2014, but his salary only reaches as high as $10.5 million (plus a $1 million bonus) in the final year of the deal. When the Packers negotiate with Rodgers, they’ll be negotiating against Brees’ deal.

Then there’s Clay Matthews and B.J. Raji. Both are playing under their rookie contracts and signed through 2013. New contracts for those players will be staring the Packers in the face next summer.

As you would expect, they’re acutely aware of the situation.

“In talking to (agent) Mike (McCartney), I think he did mention something to me that they’ve got to be a little careful because they have a lot of big-time guys coming up, which everybody is aware of,” Lang said. “That was something that came up.”

It’s been speculated the Packers are currently about $10 million under the salary cap, but that number may be smaller. It’s clear they have some work to do on the financial side in the near future.

That could mean parting ways with a high-paid veteran — Ryan Pickett, for example — or even letting one of these guys — Jennings seems most likely because of their depth at receiver — to walk in free agency.