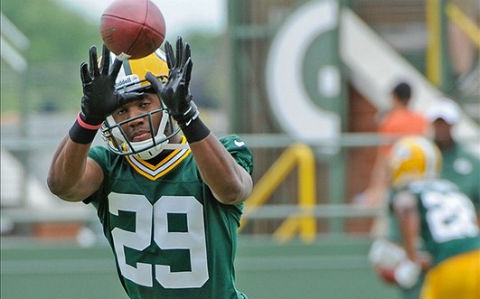 The Green Bay Packers play their final preseason game Thursday night. Their roster has to be down to 59 players by Friday night. That means jobs are on the line, people!

It also means starting jobs are on the line. In the past, the Packers have pretty much had their starting lineup set by the fourth preseason game. That’s not the case this year.

Here’s who’s battling to get on the field.

Cornerback
With Davon House injured, the Packers need to choose between Jarrett Bush, Casey Hayward and Sam Shields to start opposite Tramon Williams. If House were healthy, he’d be the guy, but he’s battling a shoulder injury. Realistically, the battle comes down to the steady but unspectacular Bush and the rookie second-round pick Hayward, who has all the talent, but is still a little rough around the edges.

Projected winner: Bush has done nothing to play his way out of the job, but Hayward has more potential. He’ll take some lumps at first, but will grow into the role. Hayward starts.

Safety
This has been a comedy of errors as far as we’re concerned. The Packers cut Charlie Peprah to open training camp and have been rotating M.D. Jennings, Anthony Levine and Jerron McMillian alongside Morgan Burnett when Charles Woodson moves to the slot in the nickel. They look exactly like what they are — young, inexperienced guys. In other words, they make a lot of mistakes. McMillian seems to have come on of late, but this decision could come down to who plays the best on Thursday night.

Projected winner: If McMillian continues to show improvement in Thursday’s action, he should win the job. If he doesn’t, the Packers will probably go back to where they started camp — Jennings.

Outside linebacker
This will be interesting. Erik Walden is suspended for the first game of the season, so he obviously won’t be the week one starter. Meanwhile, Nick Perry has been pretty much handed the job. He’s also pretty much done nothing with it. Walden, meanwhile, has played like a man on fire. The question is what happens in week two. We’re pretty sure we know, although we’re pretty sure it’s important to point out which of these guys has played better this preseason.

Projected winner: Perry, obviously. Walden could have had 20 sacks this preseason and he probably still wouldn’t have been able to win the job. Perry is a first-round draft pick and the Packers seem content to let him grow into his role on the field. Walden should get some reps as a pass rusher.

Running back
After last week’s performance, this job is Cedric Benson’s to lose. Benson has been running with the No. 1 offense during practice this week, James Starks is injured again and Alex Green is still on a pitch count. Green should be cleared to go full-on when the regular season opens, but Benson has probably already shown enough.

Projected winner: Unless he tears an ACL, Benson is the guy.