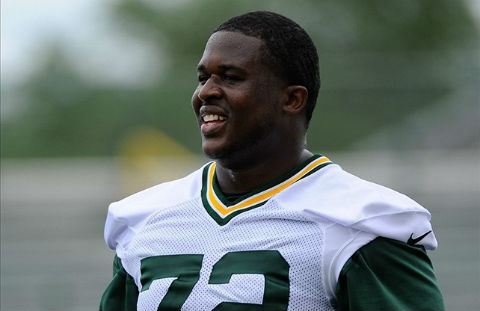 Herb Taylor, people. With Marshall Newhouse out with a concussion and Derek Sherrod still on the mend from a broken leg, the Green Bay Packers are now running their No. 1 offense with Herb Taylor at left tackle.

Who the hell is Herb Taylor? Good question.

He was a sixth-round pick by Kansas City in 2007 out of TCU. He’s bounced around the NFL since then, landing with the Packers in late 2011. He has one career start.

Unfortunately, until Sherrod is healthy, it looks like Taylor is the Packers best backup plan at the most important position on the offensive line. Rookie Andrew Datko is next in line and he hasn’t proven he’s ready for prime time.

With Newhouse and Sherrod out, a position of strength is now looks like one of weakness. During the regular season, this will not be a pretty position to be in.

Previous Article
Bears Are Going to the Super Bowl!
Next Article
Here’s Where We Apologize