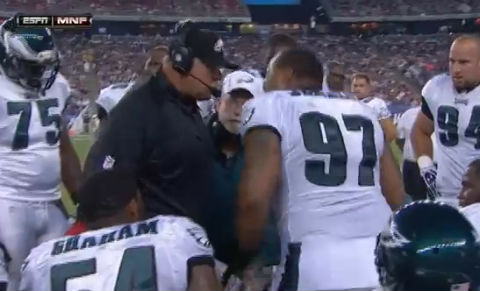 The Philadelphia Eagles played the New England Patriots Monday night and things didn’t go too well for the birds, at least at the start.

Coach Andy Reid got into a shouting match with defensive lineman Cullen Jenkins on the sideline and the two had to be separated.

Bet Jenkins wishes he would have stayed with the Green Bay Packers right about now. Oh, that’s right. Ted rode him out of town even after he offered to take a pay cut.

Previous Article
Tarvaris Jackson Could Be Option For Packers
Next Article
Oh No! Brian Urlacher and Jenny McCarthy Broke Up!