Clay Matthews and Justin Tuck in War of Words 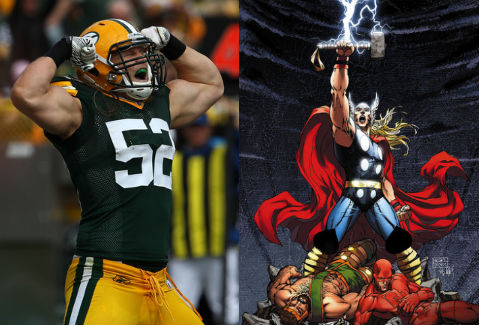 Green Bay Packers linebacker Clay Matthews and New York Giants defensive end Justin Tuck are doing the old he said/she said routine… or something like that.

Yesterday, Matthews said the Giants didn’t beat the Packers in the playoffs last season — the Packers beat themselves.

“We picked the most inopportune time to play our worst ball,” Matthews said of January’s divisional round loss to the New York Giants. “The fact is, (the Giants) didn’t beat us; we beat ourselves. We need to play our best ball when it counts. This year, I expect us to be right back where we should be.”

While there’s a case to be made for the Packers beating themselves when you look at the turnovers and mental mistakes, Tuck isn’t having it.

“Thank you for giving us the game, Clay,” Tuck said with a touch of sarcasm Wednesday. “I appreciate it a lot.”

“When they fumbled the ball, I think it was us that stripped it out,” Tuck said. “When we sacked them, I think it was us who beat their O-linemen and got to (quarterback Aaron) Rodgers. So, I don’t think they just ole’d everything and gave us the game.

“It is football, it is a funny game,” Tuck said. “Talk is cheap. Play the game. We will see Green Bay again this year so we will see who lays down that week.”

This should be fun.