Cedric Benson Has Best Shot to be Packers Featured Back 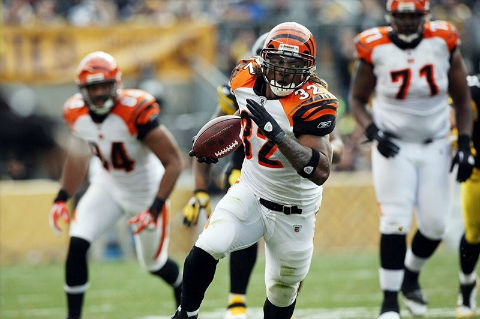 Although the Green Bay Packers will still take the running-back-by-committee approach, it looks like recent signee Cedric Benson has the best shot to be the main man.

He might just get it by default. James Starks, the No. 1 guy coming into camp, is injured (again). This time, Starks has a turf toe injury, which is expected to keep him out a couple weeks. Alex Green, who played well in limited action last week, is on a pitch count. Green is coming off ACL surgery and the Packers are being cautious with him.

That means Benson will likely get the bulk of the carries when the Packers meet Cincinnati on Thursday, when the starters will see their most extensive action of the preseason.

If he performs well, you have to think he’ll open the season as the starter.

Sunday was Benson’s first day in pads and the coaching staff liked what they saw.

“I thought he was fast in the hole. I was impressed with him,” McCarthy said. “I thought he had a couple runs where you could see his natural inside run instincts, the way he drops his weight, his footwork, I didn’t expect it to be right on the money, especially with our quarterbacks and what we’re asking him to do compared to what he’s done in the past. I thought he had a good first day (in pads).”

If Benson isn’t the answer, well, the Packers can just pass 90 percent of the time.