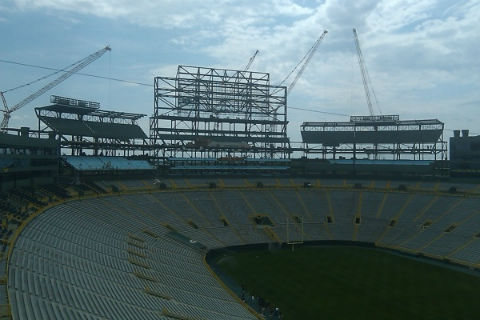 Look at this idiot.

Today, we’ve got Pro Football Talk telling people the Green Bay Packers season ticket waiting list, which is more than 83,000 strong, could evaporate quickly. You know, because if the Packers don’t upgrade Lambeau Field, people will suddenly lose interest in attending games at a place that’s been sold out since the 1960s.

The statement, which is TOTALLY plausible, comes from a post in which Packers president Mark Murphy talks about how the team is upgrading their video boards.

“[W]hen they see the scoreboards – I really think they’re going to be blown away,” Murphy said. “It’s unbelievable.  It’s four times the size of the boards we had; and the clarity and definition is just phenomenal. It’s really going to change the experience the fans have.”

The fact that the Packers are willing to make such dramatic changes when they boast an 83,000-plus waiting list demonstrates the importance of finding ways to make fans choose the collective football experience over the more intimate man-cave setting. The Packers see what’s happening elsewhere, and they know they need to stay ahead of the curve, or that the waiting list will evaporate, quickly.

Yeah. We’re sure that waiting list will evaporate quickly.

Packers fans are just that fickle.

It’s amazing a guy they put on NBC’s NFL broadcasts is this ignorant. Must be his winning personality and engrossing on-air persona.