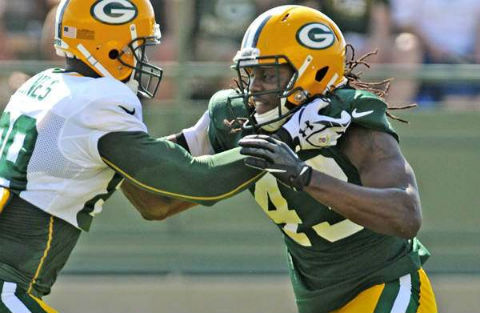 Well another year is upon us and I’ll be back at camp, likely making it to most of the practices. I’m glad to be working with Total Packers once again and I’m willing to take suggestions on any players to keep an eye out for. Please feel free to leave your comments and I will do my best to keep up with reading through your posts before making it to practice.

Stepping up on defense
The first thing I noticed this training camp is the improved play of the defense. Whether it is Davon House stepping ahead of Jarrett Bush on the depth chart or Jerel Worthy giving life to the defensive line, it feels like the offense is having much more difficulty moving the ball than last year.

It has been interesting to see all of the positions that Charles Woodson is playing, as he goes from his traditional spot matching up against a slot receiver to a position that is similar to a “rover” where he is like an in-the-box safety, playing it like a linebacker. It looks as if Dom Capers is going to do all that he can to move Woodson around as much as possible to create the best matchups for an impact player. I saw one play today where Woodson, playing near the line of scrimmage, was sent on a “cross dogs” blitz up the middle as if he was an inside linebacker and he would have been quick to sack Rodgers on the play.

Business as usual
Practice has not been as polished for the offense as years past, but I do not believe there is any reason to believe in a drop off for their level of play. Donald Driver had a strong day, making a number of short-to-intermediate catches in traffic. D.J. Williams is having another strong camp and he seems to make a brilliant catch each practice. The greatest challenge for Williams will be continuing to make an impact, as he cooled off significantly last year after a very strong start.

Two of last year’s rookies that may make a significant impact on offense this year are Randall Cobb and Alex Green. Cobb has been his typical self during training camp, making spectacular catches and showing a feel for handling punts that nobody on the team outside of Woodson has. It also feels like the Packers are concentrating on using Cobb in as many ways as possible from slants and screens to end-arounds and running him out of the backfield, similar to the way the Vikings use Percy Harvin. Alex Green will likely be a change-of-pace back, as James Starks is set to be the starter. I see no ill signs of the injury that ended Green’s season last year and he looks to be effective on screen plays and dump-off passes. The largest hurdle for Green will likely be his blitz pick-up since everybody knows the Packers want to pass as often as possible.

Emphasizing special teams
Mike McCarthy has already expressed his desire to improve tackling, but it looks like the team is also trying to put more attention on special teams. Practices already last a long two and a half hours, but the team usually meets 15 minutes before practice to walk through different special teams operations. This could have something to do with the larger roster size since teams are carrying 90 players instead of 80, but it seems like there has been an active investment in improving the special teams play. Once we get closer to the end of preseason and training camp, I will keep a tally of who is working with the No. 1 special teams units to give you guys a better feel for the on-the-bubble guys who may make the team.

I should be able to make most of this years’ practices, with the next stop being Thursday night for me. Be sure to follow along with me and look for another post on Thursday night!