Packers May Look For Veteran QB If Graham Harrell Fizzles 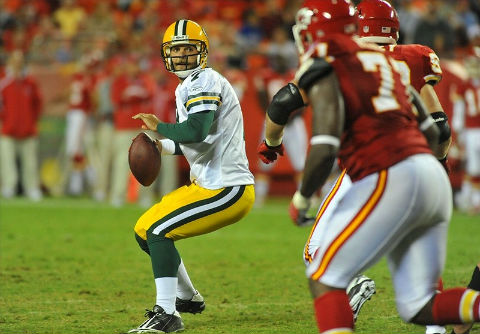 The Green Bay Packers have shown nothing but confidence in backup quarterback Graham Harrell this offseason. That says a lot, considering Mike McCarthy‘s record with quarterbacks.

McCarthy and his coaches prepared Aaron Rodgers to take over for Brett Favre. They landed Rodgers’ former backup Matt Flynn a fat contract and a potential starting job in Seattle.

That being said, word coming out of Green Bay is the Packers could pick up a veteran quarterback to backup Rodgers if Harrell doesn’t cut it in the preseason. The only other guy on the roster is rookie seventh-round pick B.J. Coleman and he’s far too raw for a team with Super Bowl aspirations to throw into a regular-season game this year.

Although he went undrafted out of Texas Tech and hasn’t played in a regular season game, there’s no reason to think Harrell can’t win the Packers’ backup job. He was a winner in college, is now in his third year in the Packers’ system and McCarthy likes him.

“I’ll say this about Graham: I’ve always been impressed with the progress he’s made with every opportunity he’s been given,” McCarthy said. “This is clearly his best opportunity of his professional career. He’s getting better. It’s right there for him as far as being the No. 2.”

Will it translate to the field? We’ll see.

If it doesn’t, the Packers have a few options.

One of those is Donovan McNabb.

Although McNabb shit the bed in his six-game stint with the Vikings in 2011, he re-devoted himself to strength conditioning this offseason. In other words, he’s hungry for one last shot. Plus, he’d likely have little trouble picking up the Packers offense. Green Bay could do a worse than starting McNabb for one or two games this season.

Another situation to keep an eye on is what happens in Miami. They currently have Matt Moore, last season’s starter, David Garrard, the former Jacksonville starter, and first-round pick Ryan Tannehill. It stands to reason they’ll part ways with one of the veterans once they sort out who’s their starter.

The other option is Cleveland’s Colt McCoy, who’s going to be replaced as the starter by first-round pick Brandon Weeden. The Packers reportedly had interest in McCoy during the draft, but nothing happened. Cleveland will eventually trade or release the veteran.

Aaron Rodgers Wins ESPY, Does Some Other Stuff [Photos]

Donald Driver Has Not Received The Memo

Donald Driver Has Not Received The Memo