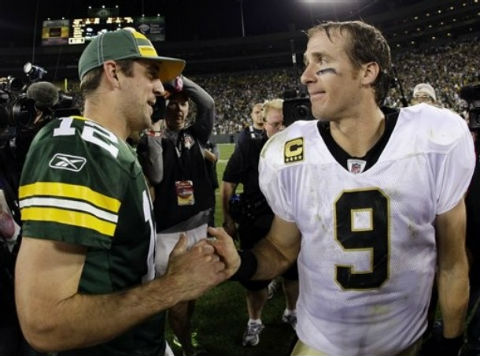 Packers defensive end Anthony Hargrove, a former Saint, has played with two of them. He says Rodgers is better than Brees.

“You know what? I’ve never seen a quarterback make some of the throws that A-Rod does. And I played with Drew Brees for two years,” Hargrove said. “When you see A-Rod put those balls on the back shoulder, you’re like, ‘Really, what can you do as a defensive player?’ You watch some of the 30-yard bullets that he throws, and you’re just like, ‘Dude, how are you doing that?'”

“It’s just amazing to watch the offense, as prolific and as special as they are,” he said. “The guys up front, everybody knows where they’re going, even (center) Jeff Saturday coming in and fitting in as a new guy in there. Hats off to coach [Mike] McCarthy and what he’s done with that offense. And A-Rod, you really can’t say enough. That’s why he’s the best.”

The best, Jerry! The best!

Frankly, the comment isn’t much of a surprise. Rodgers is known for his accuracy and he was voted the top player in the league by his peers.

If Hargrove, when he returns from his suspension, and the boys on defense can hold up their end, Rodgers’ talents should be on display on the big stage again.