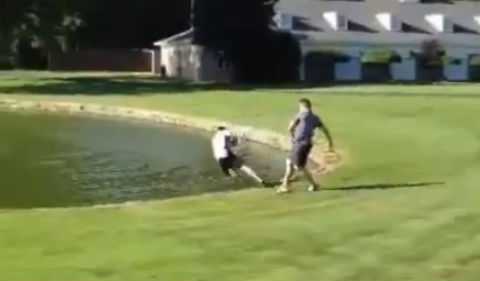 There was a video that made the rounds a few weeks back of Green Bay Packers linebacker A.J. Hawk trucking some guy into a lake during a two-hand touch football game.

The incident occurred after a charity golf tournament and it turns out it was somewhat staged.

“It was a charity golf event up in Youngstown and at the end, they have a dinner and auction and stuff,” Hawk explained. “The guy that was running the auction, I knew him, and he wanted to raise some more money. So that was his auction item (the touch football game). He paid good money to have (it). My buddy Doug Datish, who played center at Ohio State, snapped the ball to Troy Smith, and Troy Smith threw the ball to him. Then I tackled him into the water. The dude paid — the guy’s name is Bill — he paid good money to have that happen. It was originally supposed to be a normal (tackle), I was just supposed to tackle him into the grass.

“And then he came up to me before and said, ‘Hey, just knock me into the water,’ ” Hawk said. “So, I saw everyone with their cameras out, I knew it was going to get out. I didn’t know it’d be as big as it did. It was fun. I don’t regret it.”

Well, that’s a somewhat disappointing explanation. It would have been better if Hawk were just that into football he couldn’t let up and just had to knock the hell out of some unsuspecting dude.

Anyway, here’s the video in question.