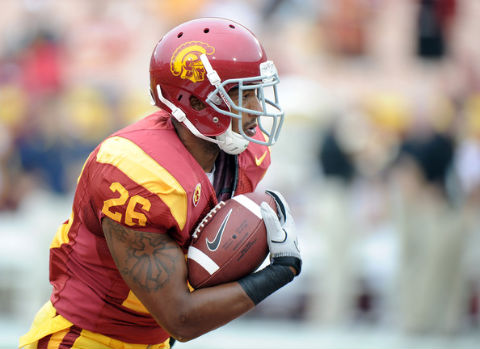 Each season the Green Bay Packers seem to end up with an undrafted free agent or two on the roster.

Last season, the Packers kept linebackers Vic So’oto and Jamari Lattimore and safety M.D. Jennings. They were later joined by running back Brandon Saine. Primarily, these guys make the team based on special teams play.

So who has the best shot of making the roster this season? Here’s who we like.

Mark Tyler
Tyler, a running back, has the USC pedigree. He led the Trojans in rushing his junior season with 913 yards. He also scored nine touchdowns and averaged 5.3 yards per carry. He was suspended for the Trojans’ season opener in 2011 for making inappropriate comments to the media. When he returned, he split time in a crowded backfield, running for 568 yards and four touchdowns. He averaged 4.7 yards per carry. Tyler’s old man is former Los Angeles Rams running back Wendell Tyler. The Packers seem to like Saine as their third back, but there’s no reason Tyler can’t challenge for that spot. There’s also the possibility the Packers might keep four running backs, since they now seem to be content keeping only one fullback.

Dezman Moses
Moses has been an OTA darling, flashing pass rush skills at outside linebacker. If he continues that when the pads go on, there’s no reason to believe he doesn’t have a shot at a roster spot. Moses started his college career at Iowa before transferring to Tulane, where he had 9.5 sacks during his senior season. Although he played defensive end with Green Wave, Moses’ quickness seems like a natural fit for outside linebacker. God knows the Packers need help at that position. All that being said, Moses’ best bet at making the team will come from his performance on special teams, much like So’oto and Lattimore before him.

Jaymes Brooks
Brooks started at guard for three seasons at Virginia Tech, where he was a two-time second-team All-ACC selection. Brooks’ biggest asset is his versatility. He can play center in addition to guard. The Packers like versatile lineman. Evan Dietrich-Smith, who was an undrafted free agent himself, has stuck around largely because he can play both guard and center. If Brooks shows anything, the Packers may want to keep him around to develop. They’ll need a new center sooner rather than later because Jeff Saturday will be 37 this month.