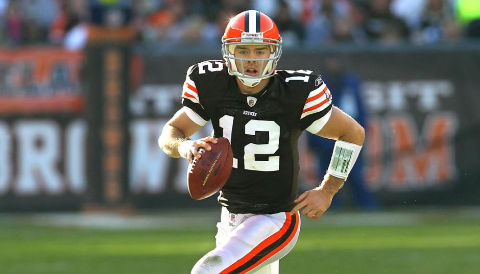 Although the Green Bay Packers haven’t given any indication they’re looking for another quarterback since the draft, they’ve nonetheless been linked to Cleveland Browns quarterback Colt McCoy again.

The Packers were said to be interested in McCoy during the draft. The Browns drafted Brandon Weeden in the first round and were dangling McCoy as trade bait.

However, the Packers drafted B.J. Coleman in the seventh round and last season’s third-stringer, Graham Harrell, is said to have made considerable strides in the offseason. Right now, Harrell will enter training camp as the clear-cut No. 2.

Is there room for McCoy? It doesn’t appear so. That is, unless the Packers are willing to take a chance Coleman makes it through roster cuts to the practice squad.

The possibility of a trade is still worth considering though. The Browns are looking for minimal compensation for McCoy.

It’s unlikely Coleman will be ready to contribute this season, so if the Packers aren’t 100 percent confident in Harrell’s ability to lead the offense a trade for McCoy still makes sense. The Browns probably won’t require anything more than a seventh-round pick for the quarterback.

Something tells us that ship sailed when the Packers drafted Coleman, but we’ll have to wait and see.