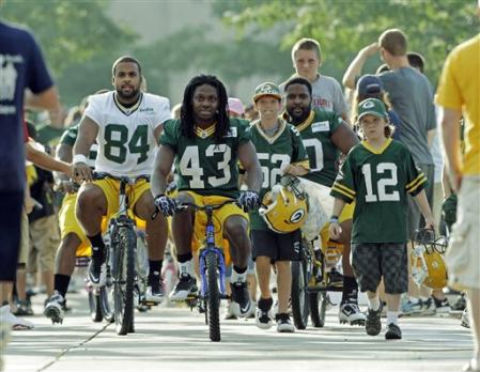 You’re probably saying to yourself, “Self, who the hell is M.D. Jennings?”

Well, he’s one of the Green Bay Packers safeties. He made the roster last season as an undrafted rookie out of Arkansas State and played in 15 games on special teams. He’s also been running with the No. 1 defense during OTAs, while Charlie Peprah recovers from knee surgery and rookie Jerron McMillian figures out what the hell is going on.

“I think (Jennings) has made real progress from the first year,” said Dom Capers, the Packers’ defensive coordinator. “He’s bigger and stronger. He’s all business. We’re going to have outstanding competition at most of the positions on defense. In my experience, that’s how you get better. If a guy has to go on the practice field every day knowing that guys are fighting for the job, then you better be ready to go out there and fight for it. (Jennings) comes to work every day and he’s all business. I think he’s a lot better football player now than he was at any time last year.”

So does this guy have a legitimate shot at starting for the Packers in 2012?

Why the hell not? Peprah is nothing special and McMillian played his college ball at Maine, which is pretty far from the SEC or any other major college conference.

Of course, two years ago at this time we were talking about what a big leap Brandon Underwood had made between year one and two. Where’s that guy now?

Still, Jennings is someone to keep an eye on. If Peprah tackles like he did last year during the preseason, there’s no reason the Packers couldn’t cut him in favor of McMillian and Jennings.