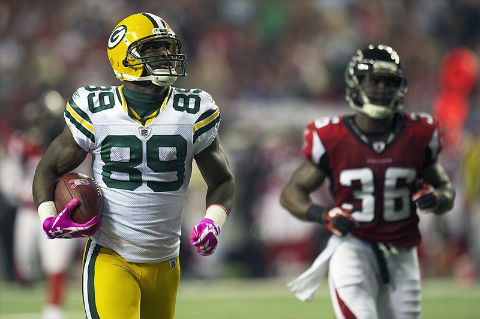 That’s the line that made comedian Rodney Dangerfield famous. That, and probably the totally awesome 80s comedy Back To School. Yeah, he was in Caddyshack too, which is a totally superior movie, but so were Bill Murray and Chevy Chase, so we wouldn’t really call that a Rodney Dangerfield vehicle. If he were alive, Rodney would probably be telling us how he gets no respect with such a statement.

You know who else gets no respect? Green Bay Packers receiver James Jones.

At least in his own mind.

“I still don’t get no respect around here, though,” Jones said. “That’s why, in all my interviews, I’m just going to start saying ‘Respect.’ Get me some shirts made.”

Jones also talked about his frustration that there aren’t enough balls to go around, but we doubt that will be a problem for anyone as long as the Packers win.

What’s more interesting is he appears open to a trade. There have been rumors that Jones is on the block, although he hasn’t been told the Packers are trying to move him.

“I don’t know how good my trade value is,” Jones said. “I haven’t heard anything about trades or anything like that. I’m just here to play football. Whatever happens, happens. I don’t worry about all that stuff up top.

“If they came to me at my locker and said, ‘James, you’re going to the Cincinnati Bengals,’ I’d cry a little bit and then move on. You’ve got to do what you’ve got to do. It’s a business.”

Obviously, Jones knows he’d get more opportunities on a team like the Bengals, who don’t have a clear-cut No. 2 receiver. Receiver-thin Miami seems like a viable option and Houston doesn’t have much behind Andre Johnson.

It will be interesting to watch this play out during training camp. Our bet is Jones either establishes himself as the clear-cut No. 3 receiver (unlikely as Randall Cobb emerges) or the Packers move him before the regular season.

Surprise! Someone Wants Out of Minnesota