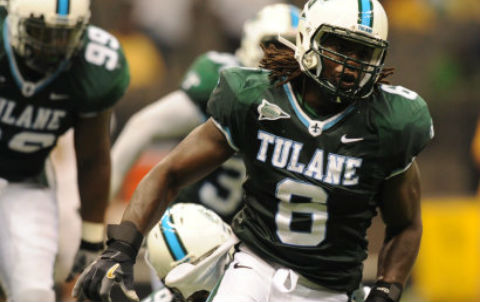 Yeah, we’re doing it again. Who the hell is Dezman Moses?

He’s an undrafted rookie from Tulane and he’s apparently turning some heads during the Green Bay Packers OTA sessions. Moses, who played defensive end for the Green Wave after transferring from Iowa, is playing outside linebacker for the Packers. He’s also getting to the quarterback, which, if you recall, the Packers rarely did last season.

“I think Moses has a natural feel for the position,” Packers outside linebackers coach Kevin Greene said. “He does a couple of things that just absolutely look natural in his movement for the position. He sees things at a very early stage. In the scheme implementation of our defense, he’s starting to see things early, and that’s always positive. He was a linebacker (in college), so he’s not making too far of a transition playing this position. He really has some good, natural feel about him.”

The praise doesn’t stop with Kevin Greene either. No way!

“We like what we’ve seen of him, and as everyone knows we’ve brought a lot of guys in here at that position,” defensive coordinator Dom Capers said. “In this defense, you’re always going to be looking for that. He’s played the position, and he’s been pretty productive at the position, so he’ll be an interesting guy to follow. He’s competing right now, and you can tell he’s been at the position before.”

So this guy is probably the next Jerome Harrison then? You better believe it! Well, maybe not…

Although he had 9.5 sacks during his senior season, the Packers haven’t put on pads yet. These unpadded OTA sessions favor guys with quickness and athleticism, which Moses clearly has. While there’s nothing wrong with that, you’ll probably want to wait until the pads go on before anointing Moses as the second coming.

That being said, the Packers typically end up keeping one or two undrafted rookies on their roster each season. Last year, three guys made it — Vic So’oto, Jamari Lattimore and M.D. Jennings.

If Moses can keep it up, he’s got a shot to make the roster. Like So’oto and Lattimore last season, he probably won’t make it on the field other than to play special teams though.

Previous Article
M.D. Jennings Is This Year’s OTA Star
Next Article
Rodgers Wants To Be Packer For Life