Bears Get Dissed In Math Problem, Charles Tillman Not Amused

The Chicago Bears are the butt of a lot of jokes around here because, well, they pretty much are a joke. Now they’re getting dissed by junior high math teachers.

The funny thing is this teacher teaches in Chicago.

Bears cornerback Charles Tillman was promoting his foundation when he was approached by a kid who showed him her math homework. It looked like this. 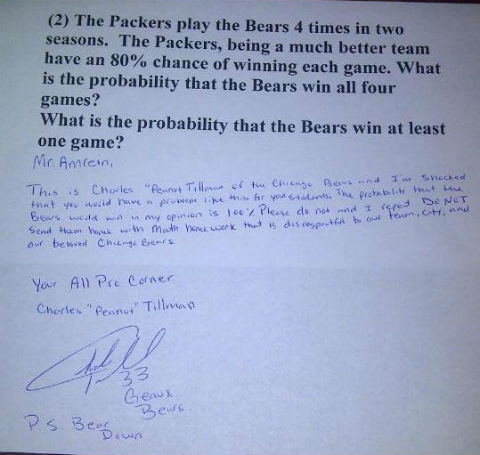 As you can see, the problem in question talks about the Green Bay Packers beating the Bears, noting that the Packers are the much better team. Obviously, this is completely factual, but Tillman didn’t think too much of it.

His response is as follows.

This is Charles “Peanut” Tillman of the Chicago Bears and I’m shocked that you would have a problem like this for your students. The probability that the Bears would win in my opinion is 100%. Please do not and I repeat DO NOT send them home with math homework that is disrespectful to our team, city and our beloved Chicago Bears.

What else is apparent is Tillman probably failed math, since that is clearly the wrong answer to the question. Of course, we’re not surprised.