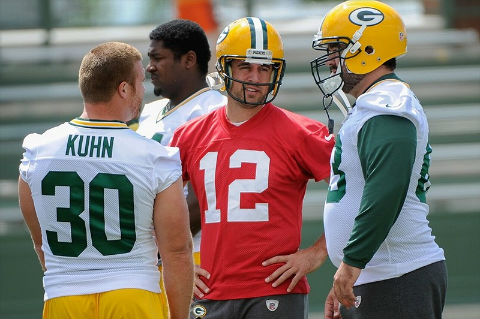 Green Bay Packers quarterback Aaron Rodgers is the No. 1 ranked player in the NFL Network’s Top 100.

We normally wouldn’t care about some stupid NFL Network poll, but this one carries a little more weight because the rankings are based on voting by players. So while Michael Vick is pissing and moaning about being ranked too low and some jerkoff from the New York Giants is whining because his ho-hum quarterback, Eli Manning, isn’t high enough, there will be no such complaining in Green Bay.

Aaron Rodgers is the man!

He rose from No. 11 in last year’s rankings.

“It’s very humbling,” Rodgers said in post-show interview with NFL Network. “It’s a great honor anytime you’re recognized with that professional respect from your peers, that really means a lot to me, so I have to thank them for the votes. Obviously, this is in a recognition that doesn’t get done without an incredible group of people around you. That’s often lost when the focus is on one individual. My teammates, my coaches, our tens of thousands of owners that we have there in Green Bay and across the country, I have to give them a lot of things, as well.”

Actually, there are hundreds of thousands of owners, Aaron, but we’ll let that slide.