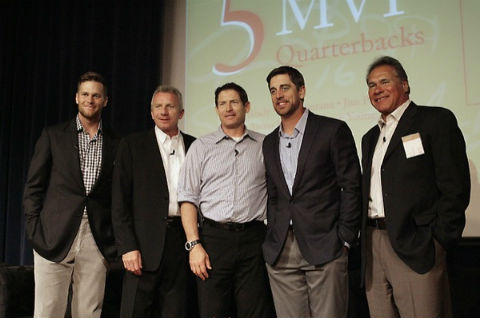 Green Bay Packers quarterback Aaron Rodgers spent part of his Friday hanging out with some of the greatest players to ever play the game of football.

The charity event was organized by longtime 49ers offensive lineman Harris Barton and aimed to raise between $500,000 and $750,000 for brain tumor research at UCSF and the First Tee Program of Northern California.

The players shared their Super Bowl memories and had some laughs, but the real star of the show?

Joe Cool? Maybe, but probably not.

Moderator Bob Costas? Hell no, that guy is a total douche.

No. The star of the show was Tom Brady’s hair.

Here’s a gallery of Rodgers at the event from the San Jose Mercury News. You can read more about what went on there by clicking the link.