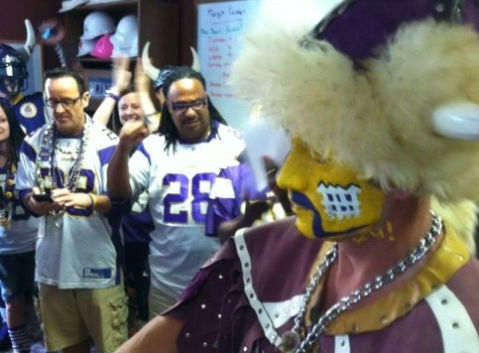 Idiot Minnesota Vikings fans finally have a new stadium plan approved for their embarrassment of a team.

The Minneapolis City Council provided the final rubber stamp on the process by approving the stadium plan 7-6, on Friday.

Mayor R.T. Rybak celebrated with a swig of Grain Belt beer out of a horn in his office.

“I feel obviously incredibly happy to have this over,” Rybak said. “This has been a bruising fight. I feel in my gut a little bit like I imagine the Vikings feel after a win. You’re happy you won, but you’ve got to go sit in the hot tub and take care of the bruises for a little bit.”

What? No Hamms available?

The stadium will be built on the site of the Metrodome and the Queens will play in the University of Minnesota’s stadium until it’s done.

So, here are the positives if you’re a Green Bay Packers fan.