Terrell Manning Could Mean End Of Line For Hawk 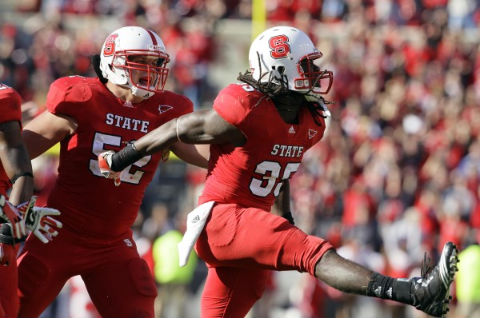 The Green Bay Packers fifth-round draft choice Terrell Manning does not lack confidence, that’s for sure.

Manning thinks the Packers got a steal.

“I feel like I was as good as any linebacker in this draft,” he said. “I’m looking to prove that.”

Although maybe he’s reaching a little bit, Packers GM Ted Thompson was clearly surprised Manning was on the board when he was. Thompson traded up, sending two seventh rounders and a sixth to the Patriots, for pick No. 163, where he selected Manning.

“It was just a situation where we felt a player was being undervalued a little bit,” Thompson said. “We didn’t know how long he would be undervalued.”

Manning came out after his junior season at North Carolina State, where he did a little bit of everything for the Wolfpack. He finished 2011 with 76 tackles, 5.5 sacks, four forced fumbles and three interceptions.

Desmond Bishop is entrenched as one starter and D.J. Smith showed plenty last season as a rookie. He could replace Hawk in the starting lineup. Robert Francois also showed he belongs in limited action.

Either way, Bishop, Smith and Manning are probably guaranteed roster spots, meaning the last inside linebacker spot comes down to Hawk and Francois.

Previous Article
Packers New Quarterback Was Mentored By Brett Favre
Next Article
No, Aaron Rodgers Will Not Host SNL… Yet