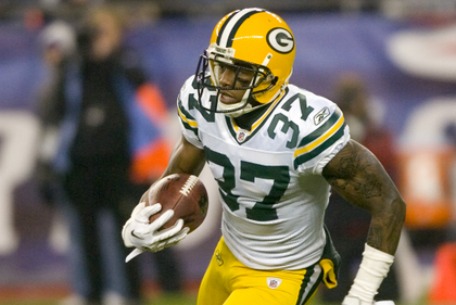 Radar Online ran a report last week detailing the sordid affair of Green Bay Packers cornerback Sam Shields and his former girlfriend, who had been living together. As you might expect, it’s dumb, completely one-sided and nothing that we really care about. So, like we do with these things, we annotated it for you!

Radar first, followed by our comments.

And you may need a lesson in journalism, but who the hell cares? This is a juicy story, but do you think any of your 17 readers know who the Green Bay Packers nickel cornerback is? You should have just identified him as a guy who plays with Aaron Rodgers.

On Thursday, the 24-year-old football player unceremoniously threw his fiancée Melissa Lopez out of the home that they once shared, rendering her homeless, RadarOnline.com is exclusively reporting.

HOLY SHIT! YOU GUYS GOT A REAL SCOOP ON YOUR HANDS! AND WAY TO GET THE FUCKIN’ EXCLUSIVE! JUST WAIT TIL ENTERTAINMENT TONIGHT CALLS TO INTERVIEW YOU!

Sources close to the couple told Radar that Shields initially split from Lopez last year and did so in the cruelest of ways.

Sources? Their neighbors, a family member or just some pissed off friend of Lopez’s that wants to make Shields look bad?

“He woke her up in the middle of the night, threw $300 at her and totally out of the blue ordered her to get out immediately,” the insider said. “He just told her he didn’t like her anymore.

Ah, this person is an “insider.” Are we talking about someone who was crouching stealthily in the corner like a ninja in order to be undetected while this happened? Or is it someone like that whistleblower Russell Crowe played in that movie?

“He told her that he had met someone else and she had to get out, right then and there. She gathered what she could and left and then lived out of her car for months and stayed on friends’ couches whenever she could.”

In Wisconsin we like to do something called “get a fucking job” so we can get stuff like places to sleep and cheese.

Shields apparently then had a change of heart back in January and told Lopez she could move back in and stay in the apartment until the lease expired in July while he went out of state.

God forbid he tell her to get a fucking job.

But last week Shields told Lopez that he had changed his mind yet again and she was going to have to move out, immediately!

Shoulda made a friend with a spare room during this time instead of sitting on your fat ass watching The Price Is Right.

“Today he just showed up at the apartment with a moving truck — just out the blue — and moved all of the furniture and everything out of the home,” the source revealed.

Ah, there’s that ninja-like source again, who we’re pretty sure is Shields’ personal assistant since they have such intimate knowledge of his plans and actions.

“He hardly even said a word to her. He just ignored her and helped the movers get everything out. When she asked him what she was supposed to do or where she was meant to go he was just cold and said, ‘I don’t know.’

“Melissa doesn’t have any family there. She just knows the other football wives and girlfriends so it’s complicated. He had totally given her the impression that they were going to get back together.”

See, that’s the problem with women. Just because you happen to make eye contact with them during sex, they think you’re in love. Keep your eyes closed! Think about Kim Kardashian!

The building manager has told the 25-year-old that she will have to vacate the property immediately because she doesn’t qualify to take over the lease on her own.

I wonder why she lacks the capital or credit that would allow her to sign a lease?

If he didn’t play with his head up his ass in 2011, he’d probably be competing for a starting spot and looking at more money.

“Melissa moved to Green Bay to be with him. She was with him before he signed his big contract. They were together for three years and she really stood by him.

Ah, she must be entitled to half then. For, you know, moving to Green Bay with him and really standing by him.

“She was using a car that he was getting for free, all he had to do was give the rental company a signed ball and jersey. And he had the company come and take the car away from her too even though he wasn’t even paying for it.

It’s almost as if there’s a lesson to be learned here. I wonder what it might be?

“Melissa has had to deal with a lot from him. He had told her that he only had two children. But she later found out he actually has three and maybe another one on the way as there’s a girl in Green Bay who is pregnant and wants him to take a paternity test.”

Shit, Shields went to The U. He’s got at least seven kids.

Previous Article
Woodson Not Opposed To Playing Safety
Next Article
Packers Have Best Line In NFL?