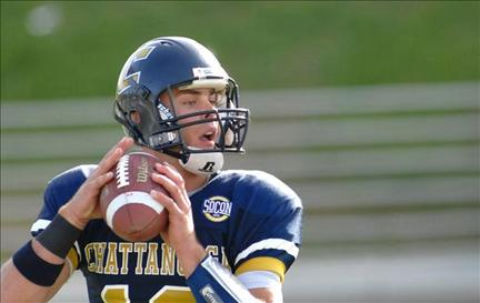 It looks like the Green Bay Packers got a little bit of Brett Favre when they selected Tennessee-Chattanooga quarterback B.J. Coleman in the seventh round.

Coleman was mentored by Favre prior to the draft. Oh, and as an added bonus, the Packers will get to deal with agent Bus Cook again. Favre’s agent is also Coleman’s agent.

Who bets Coleman is the last of the Packers picks to sign?

Anyway, Coleman was pretty excited about being tutored by Favre.

“You’re talking about an awesome legend,” Coleman said of Favre. “What an awesome experience for me to be a part of his legacy.”

“Every second I was with him you can learn something new,” Coleman said. “Just from the mental aspect of the game, just picking up different coverages, and just the subtle things. The physical stuff, talking about how playing quarterback. It’s just endless. He’s one of the best. He’ll go down as one of the greatest.”

Although we’re not sure what the full curriculum consisted of, we’re pretty sure these things are included at The Brett Favre School of Football.

Fortunately, we’re pretty sure Mike McCarthy will break Coleman of any bad habits he may have picked up from Favre in time.