No, Aaron Rodgers Will Not Host SNL… Yet 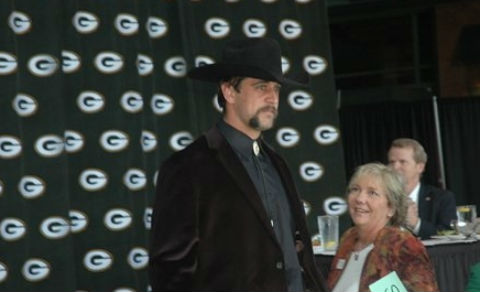 Saturday Night Live has been hot after Green Bay Packers quarterback Aaron Rodgers. In fact, they’ve already asked him to host the show.

And why not? He’s one of the most popular players in the NFL and unlike some of the stiffs from the NFL they’ve had hosting the show, he’s actually somewhat interesting. Yes, I’m looking at you Peyton Manning and you, Eli Manning.

I mean, think of the possibilities if Rodgers were to drop in on Bill Swerski’s Superfans, which is actually the only thing remotely associated with the Chicago Bears that we enjoy. Da Bears!

Rodgers said he wants to host the show, but explained why he hasn’t accepted the offer to do so on Tuesday.

“I have been invited. I want to do it right and the commitment that it takes, in my opinion to do it the right way, was just too much for me this offseason. I will be doing that in the future and look forward to the opportunity. NBC has been great to me and I’ll look forward to getting on there. Peyton set the bar pretty high and it’ll be interesting to see Eli this week to see if he can live up to his brother’s appearance.

“It’s a lot of rehearsal and I’d like to do it right — spend a week out there, spend time with the writers and the actors and put on a good show. As we’ve seen, you can tell the people who really put the time in on it and the people who maybe couldn’t make the same kind of commitment.”

We’re not sure what sort of commitments Rodgers has this offseason, but we’re sure they’re numerous. Hopefully, his No. 1 remains winning another Super Bowl with the Green Bay Packers.