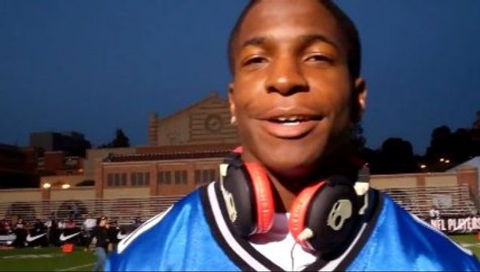 Apparently, when someone on the Detroit Lions isn’t getting arrested for weed, they’re punching each other in the face.

After both Mikel Leshoure and Nick Fairley got picked up for marijuana earlier this year, the Lions suspended receiver Titus Young for the first day of OTAs for punching teammate Louis Delmas.

I’m not even making this up.

In true Lions form, Young punched Delmas while he wasn’t looking. Kind of like stomping a defenseless offensive lineman while he’s laying on the ground, wouldn’t you say?

Detroit Lions receiver Titus Young was not allowed to participate in organized team activities today due to a fight last week with safety Louis Delmas, according to sources.

Young and Delmas fought during one of Detroit’s voluntary workouts last week. According to sources, Delmas and Young got into a confrontation during the workout. Young allegedly punched Delmas when he was not looking.

No one had anything to say about the incident today and Young hasn’t been charged.

You kind of have to wonder what the hell is going on in Detroit, though. What do you think the chances of this team imploding are?

They couldn’t really employ anymore morons than they already do, could they?

Mark Murphy Is Leaving! No He’s Not!

Mark Murphy Is Leaving! No He's Not!