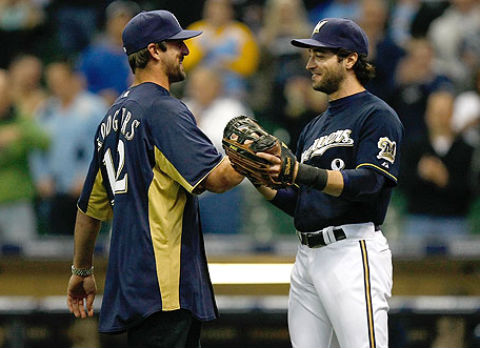 What do they know about food? Well, they like to eat it, so they’re obviously qualified to feed you. That, and they’ve both got buttloads of cash laying around and aren’t really sure what to do with it, so why not throw it into a restaurant?

The joint is called 8*twelve, it’s in Brookfield and will open this month. It’s also sure to draw the fanny pack set because it will be like a vacation from the fine dining of Applebee’s for those special occasions when they venture into the big city for shopping or other leisure activities. And Aaron Rodgers owns it!

According to a press release, “both Rodgers and Braun played a large role in developing the concept and the menu that will feature American cuisine, steaks and seafood along with a wood-fire grill in the kitchen.”

“Me like steak,” Rodgers said. “I prefer a nice salmon cooked to perfection and a side of rice,” Braun said. We’re pretty sure this is how the menu was decided.

Décor of the restaurant has been described as rustic, like a ski lodge or maybe a nice barn, with a casual sports-themed bar featuring memorabilia and televisions. So feel free to wear your cheesehead!

Anthony Hargrove Will Probably End Up In Court

Woodson Not Opposed To Playing Safety

Woodson Not Opposed To Playing Safety