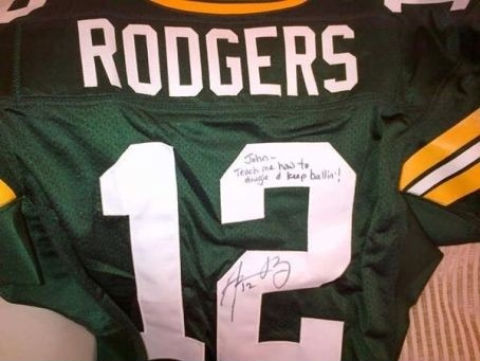 Green Bay Packers quarterback Aaron Rodgers must have something for mediocre basketball players.

Okay, yeah. Wall is maybe a little better than mediocre, but he’s no All Star.

Anyway, on the jersey Rodgers writes, “Teach me how to dougie and keep ballin’.” Wall tweeted something like, “Appreciate the jersey homie.” So, you know, they’re homies.

We’re going to guess this friendship sprung from the Kentucky Derby, since we can’t see any other way these guys might be connected. Rodgers has been to the Derby the past two years and Wall played at Kentucky, whose current and former players are given the royal treatment at the event.

Packers Have Best Line In NFL?

Guess Who's Favored In Every Game In 2012