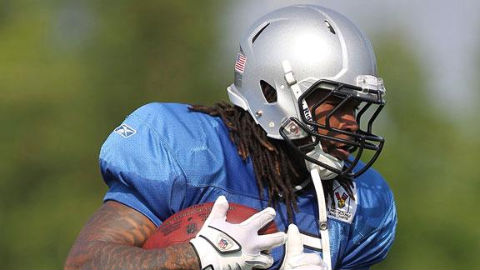 You remember Minnesota Vikings running back Onterrio Smith. He flashed some potential in 2003 and 2004 and then was out of the league by 2006. Oh, he’s also the guy who got caught with The Whizzinator — a kit used to beat drug tests — in the Minneapolis airport and suspended for a year, which ultimately ended his career.

Apparently, Detroit Lions running back Mikel Leshoure has decided to take a page out of Smith’s book. The Leos’ second-round draft pick from last season has now been arrested twice for marijuana possession since February. He also missed a court appearance today.

It gets better though. The second time Leshoure was tagged for weed, he was caught trying to eat it.

Leshoure, who missed all of his rookie season with a torn Achilles tendon, was the passenger in a rented 2012 Mitsubishi SUV that was pulled over March 12 while driving westbound on I-94 in the southwestern part of Michigan, according to a Baroda Lake Twp. Police case report.

The officer observed Leshoure “chewing marijuana” and saw “small pieces of marijuana down the front of his shirt,” according to the report. Leshoure complied when he was ordered to spit out the marijuana, the report said.

According to the report, Leshoure admitted to smoking marijuana before he was pulled over but said most of the substance in his mouth was potpourri that was mixed with the drug.

Leshoure will undoubtedly be suspended by the NFL. The only question is how long.

What we do know is it will be more than a year since he was drafted before he ever plays a down of football for the team. Well done, Minnesota. I mean, Detroit!