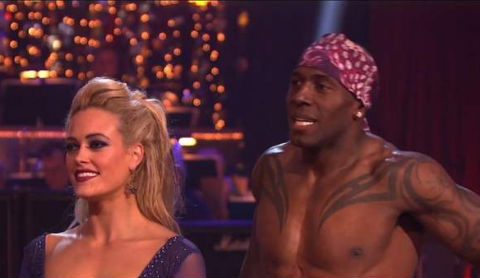 Surprise! We don’t watch Dancing With The Stars, even when Green Bay Packers receiver Donald Driver is on the show.

You may ask yourself, “Self, why wouldn’t Total Packers watch Dancing With The Stars when Donald Driver is on the show? He plays for the Green Bay Packers!”

Well, it’s because we don’t give a shit about contests that don’t involve an end zone or a money shot. That being said, we’re doing our public service as the Packers site of record. We’re throwing a bone to the broads and we don’t mean that literally.

It turns out our man Double D pulled out the stops on DWTS Monday night. He did so by taking his shirt off and word is, he promptly received the highest score of the evening.

What the hell that means, we have no idea. We’re pretty sure the broads will like it though.

Anyway, it seems obvious to us — when Driver’s partner Peta Murgatroyd takes her shirt off, their score can only get higher. Right?