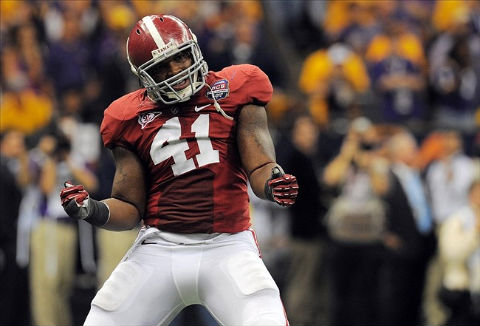 The first round of the NFL draft is this evening and the consensus among a bunch of people who know pretty much nothing about what the Green Bay Packers will do is the team will select Alabama outside linebacker Courtney Upshaw or Boise State outside linebacker Shea McClellin.

Clearly, the Packers need to address their anemic pass push and adding an outside linebacker to complement Clay Matthews would do just that.

Of the two, Upshaw is ranked higher and may not be available when the Packers select at No. 28. McClellin could very well be available and is considered the better pass rusher of the two. So why is Upshaw ranked higher?

One, he played against superior competition at Alabama and two, he’s bigger. There are also some injury concerns about McClellin — he reportedly suffered three concussions in college.

If the Packers like Upshaw and let’s be honest, they probably do to some degree, they may actually consider trading up to select him. Fox Sports’ Paul Imig has been pushing the possibility all week.

With a player like Alabama defensive stud Courtney Upshaw potentially being selected before the Packers are up, this could be the year that [Ted] Thompson once again trades up. After all, with 12 picks at his disposal, Thompson wouldn’t be hurt too badly if he traded three of them away in order to move up 10 spots.

The Packers would probably be pretty happy with either player.

Here are the obligatory Courtney Upshaw highlights. By the way, the dude was the MVP of the national championship game.

Here are the obligatory Shea McClellin highlights. Dude can definitely get around the edge.