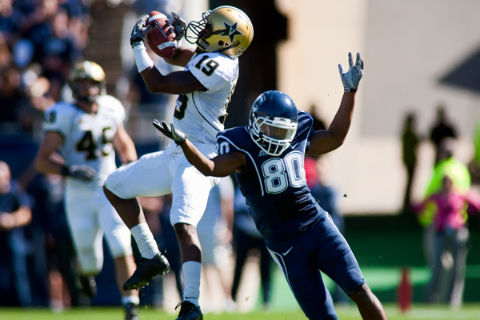 The Green Bay Packers are some trading fools today!

The Packers traded up for the second time in the second round, this time with the New England Patriots, to select Vanderbilt cornerback Casey Hayward at No. 62.

If Hayward looks good as a rookie, does this mean the Packers move Charles Woodson to safety to replace Nick Collins?

Here’s the book on Hayward from NFL.com.

Strengths: Hayward can diagnose plays and be in position from the get-go. He will be physical when reacting to pass plays and has the speed to cover for extended periods of time in man coverage. He is a lanky player who can extend and secure interceptions when covering close. He is a reliable tackler when around the ball.

Weaknesses: Hayward is a decent player in zone looks but not the quickest reactor. He trusts his speed too much at times, which can get him in trouble when he plays too far off the receiver. He is a smooth athlete but not very quick twitched.

Here’s the book on Hayward from CBS Sports.

Strengths: A coordinated athlete with good footwork and balance. Heady cover player with above-average feel and anticipation in space. Trusts his eyes with very good awareness. Has very good reaction skills to break quickly on the ball. Savvy cover skills to recognize and anticipate routes, understanding what the offense wants to do. Has terrific ball skills with the focus and hands to secure interceptions in traffic. Very opportunistic with 15 career picks the last three years. Tough and aggressive to hold up against the run and work off blocks. Smart, aware and confident and has started every game the past three seasons at Vanderbilt (37 consecutive starts).

Weaknesses: Has only average height and length (30-inch arms) with a slender frame and lean muscle definition. Lacks top-shelf speed and doesn’t have great acceleration. Doesn’t have elite fluidity and struggles to recover after false steps. Lacks explosion in his transition with upright technique and has inconsistent backpedal, opening his hips prematurely to guard against vertical routes. Doesn’t look natural in reverse and needs to keep the play in front of him to be effective. Lacks ideal strength and will be out-muscled by receivers. Inconsistent against the run and needs to improve his tackling fundamentals in order to finish. Too physical and hands-on in coverage, arriving early and attracting pass interference penalties. Lacks much experience in press coverage and appears scheme specific at the next level.

This isn’t the best video, but here are some Casey Hayward highlights.