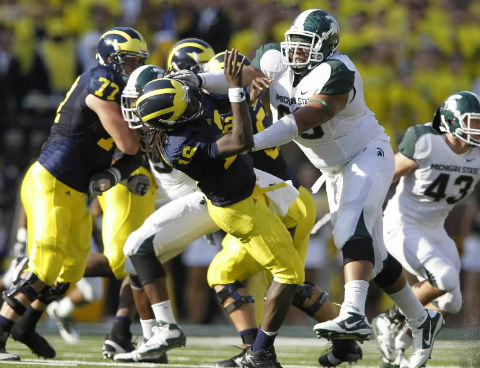 The Green Bay Packers traded up in the second round of the NFL draft to select Michigan State defensive tackle Jerel Worthy.

The Packers moved up to the 18th pick in the round, trading their second rounder and pick No. 123.

Worthy, who was a first-team All-American in 2011, came out after his junior season. He finished the season with 30 tackles, including 10.5 for a loss and 3.5 sacks. Worthy is 6-2, weighs 308 pounds, ran the 40 in 5.08 and may be an immediate starter for the Packers. Although he played on the inside in college, he will step in at defensive end for the Packers, which could make a starting front three of Worthy, B.J. Raji and Ryan Pickett.

Worthy is solid against the run and anchored a Spartans unit that led the Big 10 in rushing and total defense. He can also get after the quarterback, although he didn’t put up huge sack numbers.

This kid had first-round talent, but slid because of a ho-hum combine performance. Frankly, we love the pick. In fact, the way we feel about this pick is the complete opposite of the way we felt when the Packers selected Mike Neal in the second round a few years ago.

Here’s the NFL.com analysis of Worthy.

Strengths: Worthy is very thick and powerful throughout his upper body and has thigh power that helps him blow back interior linemen off the snap. He has a surprising burst for a player his size and is capable of knifing and slanting the line to get into the backfield almost instantaneously. He is a leverage-savvy player who understands how to win with either his quickness or bull rush.

Weaknesses: Worthy gets upright off the snap and really has trouble if he doesn’t win with a burst off the snap. He struggles in space and has a difficult time breaking down his weight to fit on a ball carrier. He can get neutralized at times by double teams, not out of a lack of strength or talent, but because of poor effort and a breakdown of technique.

Pass rush: May not put up huge sack numbers, but is a constant thorn in a quarterback’s side in pass rush situations. Swims past lesser linemen with a shake and quick, violent hands. Closes on the passer in a hurry once free. Will sometimes line up a half-yard off the line to give himself room to make his move. Does not split doubles regularly or have a great bull rush, often giving up after initial contact. Run defense: Packs power and has quick feet to handle one or two-gap run defense responsibilities in the box. Tough to move, stands up blockers when anchoring against the run. Brings down backs from behind within the box and straight up the middle, but does not regularly chase plays downfield or towards the sideline. Spins off blocks but doesn’t have elite change of direction to reach quicker backs going through the hole once he’s left it. Gets caught up in his man’s chest at times, failing to get off to make a play. Quick backs elude him easily in the hole. Avoids cut tackles to stay upright, but lacks quick acceleration to get into plays away from him. Explosion: Impressive explosiveness off the snap, shocks his man with a strong initial punch and can also out-quick him to get into the backfield. Quick to get low, create a pile in goal lone situations. Gets too worried about contact or penetrating a gap that he sometimes forgets to find the ball. Strength: Already excelling in this area, should get even stronger in a pro strength and conditioning program. Strong hands allow him to shed lineman in either direction to catch backs coming into his area; consistency in using them could be improved, however. Once he gets a guard on skates, puts them into the quarterback. Takes his man backwards when slanting, also effective occupying two men on twists to free up the end. Tackling: Limited area of coverage results average tackle numbers for the position. Swallows up ballcarriers in the box with length and superior upper-body strength, though, leading teams to stay away from inside runs. Closes well on quarterbacks and running backs in the backfield and rarely gets go of ballcarriers once making contact. Has enough agility and athleticism to grab backs from behind after a strong swim move. Intangibles: His stamina and conditioning will be a concern for scouts unless improvements are made. Vocal on and off the field; points out potential hot receivers and run plays to teammates before the snap, something you don’t see many interior linemen do.