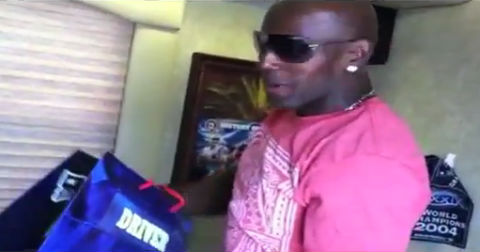 This was brought to our attention and we now really wish we could have those two minutes of our life back. We thought we’d show it to you because maybe you like Maria Menounos or are into Dancing With The Stars or are a fan of Extra or something.

Here’s the background. Menounos is on DWTS with Donald Driver this season. She’s also an idiot Boston sports fan, so she’s quick to point out how awesome the Patriots are at any and every turn. And then you get moronic stuff like this.

Here, Menounos fills up Driver’s trailer with a bunch of Patriots crap. You know, because he plays for the Green Bay Packers, but secretly wishes he played for the New England Patriots. Har!

Menounos also proceeds to do a bunch of yelling, which my god, is so annoying I want to jam one of Tom Brady‘s used socks into her stupid mouth to stop it. I guess she was probably having her Farva moment — “I got you good you fucker!”

Way to go, you stupid broad.

Previous Article
Collins May End Up Playing Elsewhere
Next Article
Uh Oh! The Bears Are Contenders