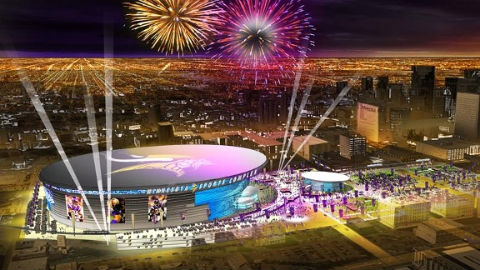 You remember the Minnesota Vikings, don’t you? You know, that totally irrelevant franchise to the west with the most ignorant fans in all of sports?

Yeah, well, they’re about to get a new stadium to replace the garbage dump known as the Metrodome. Or, at least, they’re hoping to. This thing has been tied up in the political process for years, mostly because their dumbass fans didn’t want to pay for it. Anyway, they’re reportedly closer than ever to getting this new shithole built. Word is, it will set some sort of record for largest gathering of people who read at less than a sixth-grade level during the initial Vikings game.

Basically, what they’ve done here is copied elements of Lucas Oil in Indianapolis and University of Phoenix in Phoenix, which is appropriate because no one from Minnesota has ever had an original thought of their own.

On the right side of the photo above you’ll notice what’s supposed to be a tailgating area, but will eventually be dubbed “The Rape Pit” by meathead Vikings fans. If you happen to be a woman or a heterosexual man, you’ll want to steer clear of that area unless you’re looking for a special treat from Ragnar and his merry band of recently-released prison inmates.

The other odd thing about the stadium photo are the fireworks. I mean, the thought of the Minnesota Vikings winning anything that would prompt fireworks… hahahahahahahahaha!