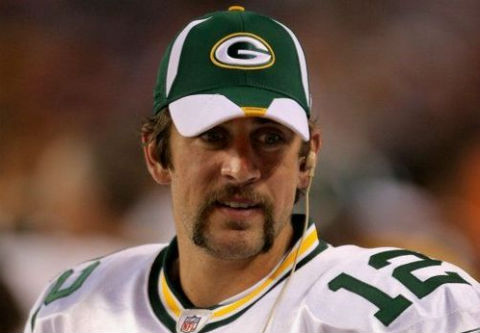 Green Bay Packers quarterback Aaron Rodgers made the final four for the Madden 13 cover, which is voted on tournament-style by fans. Fortunately, he lost there to Detroit Lions receiver Calvin Johnson.

Why do we say fortunately? Because anyone who appears on the Madden cover comes into some sort of misfortune. Look at last year’s winner, Cleveland Browns running back Peyton Hills. Where’s he right now?

I’ll tell you where — playing on a one-year deal with the Kansas City Chiefs. After getting the Madden 12 cover, Hillis’ 2011 season was beset with injuries, pouting and not getting the new contract he was pouting about not getting.

Here are some other examples.

Daunte Culpepper (Madden 02) — The Vikings started 4-7 with Culpepper at the helm and then he got injured. The team missed the playoffs.

Vince Young (Madden 08) — Was injured five games into the season. Lost his starting job to Kerry Collins. Hasn’t done anything since.

We could go on, but be thankful Rodgers won’t be on the cover this season. Johnson will face Carolina Panthers quarterback Cam Newton in the finals.

One of them will tear his ACL by week six.