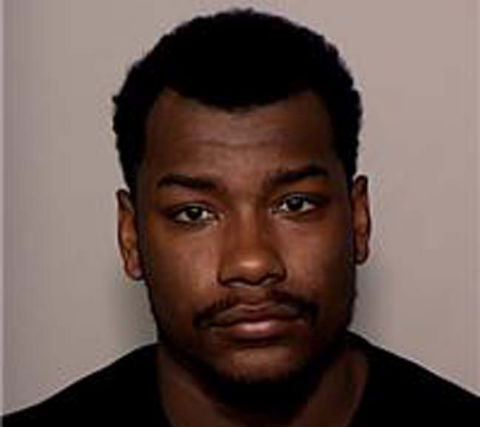 With all that was going on with the draft and so forth, we sat on this one for a couple days. There’s no way we could ignore it though.

Continuing the Minnesota Vikings tradition of being a complete and total fuck-up, running back Caleb King was arrested Saturday for allegedly assaulting a man for teasing him. The guy received 50 stitches and might have substantial brain damage.

Here’s what happened, according to the sheriff’s office.

King was attending the birthday party of a 21-year-old female friend in Oak Grove when he took offense to the victim teasing King “about his resemblance to a celebrity” about 3:15 a.m. King followed the victim to his car and punched him in the face, and when the victim got into the car and locked the passenger door to call 911, King opened the driver’s-side door and pulled the victim out, punching him several times and throwing him head-first to the ground.

Homeowners took the victim inside and refused to call 911, the report says, but the sheriff’s office tracked the victim’s cellphone location from the attempted call inside the car. The homeowner told a deputy outside of the home that there was no problem, the report says.

When he was arrested King said the man simply fell to the ground while he was talking to him.

This isn’t the first time King has been in trouble. He was suspended two games while at Georgia for failing to appear in traffic court. He was then suspended for the team’s bowl game for missing an academic meeting. He was later declared academically ineligible and entered the supplemental draft, where he went undrafted.

So, who would want to sign a complete moron like this? Well, the Minnesota Vikings, of course! Hell, he fits right in with the rest of the organization!

The real question now is, which celebrity do you think King looks like? Rodney King is the first one that came to our mind, which would be somewhat ironic given the situation.