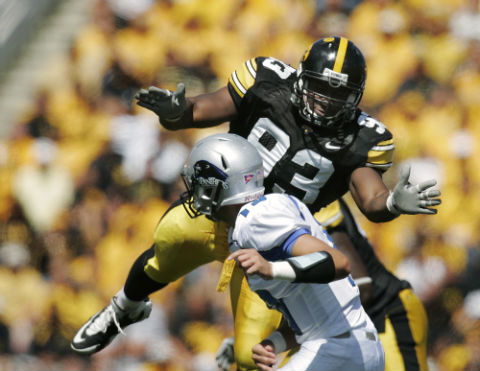 The Green Bay Packers continued their run on defensive players on the third day of the NFL draft before finally taking an offensive player in the seventh round. Here’s a look at the scouting report and highlights.

Daniels will be expected join the defensive line rotation and seems to be a potential future starter. As one of my friends noted yesterday, Mike Neal, Jarius Wynn and C.J. Wilson might want to start packing their bags now.

Strengths: Daniels is quick off the ball and uses his small frame to work between blockers. He has the instincts to understand schemes and work against them, and he is strong enough, despite his relative lack of size, to engage and then shed a blocker to burst to the play. He is flexible and an overall active interior player.

Weaknesses: Daniels is undersized and gets engulfed by bigger blockers and double teams. His strength and effort will suffice, but bigger players have a clear advantage on him at times. He will have to be placed in good spots and schemes to be effective inside in the NFL.

McMillian is fast — he ran the 40 in the 4.3-4.4 range — and he can tackle. He also played at a small school, so it’s going to be an adjustment to the caliber of play in the NFL. Don’t look for him to be much more than a special teams contributor this season.

Strengths: McMillian brings a physical presence to the back end of the defense, reacts to passes well and can force his body hard in one direction to make a play toward the ball, much like he does in his reactions to the run. He is quick to diagnose run and pass, and reacts to the run much better coming toward the line of scrimmage than he does moving away. McMillian is NFL-ready in supporting the run.

Weaknesses: McMillian can struggle in some of his transitional movements when playing the pass. He looks to support the run first and this can get him to bite at times.

Manning was a playmaker in college, but still has room to grow. He was considered a fit for the 4-3 coming out of college. He’ll have to put on some weight to play in the Packers 3-4.

Strengths: Manning reads and works off the movements of offensive linemen well. He excels as a run defender where he has the strength hold his ground and keep plays inside of him, or rework back out to run down ball carriers. He takes on blocks well and shows obvious strength when shedding them. He is aware of his size and keeps himself clean of blocks consistently, and is a physical player who can maul tight ends when aligned over them to disrupt their timing. He has a good short area burst to close on the ball and displays the body control to keep his feet churning. He is productive in the backfield, with four sacks and 12 tackles for loss in 2011.

Weaknesses: Manning has a decent frame but could have trouble getting the same type of production as an edge rusher at 230 pounds in the NFL. He doesn’t show the same burst when chasing down runs to the outside that he does in short areas in the backfield, and he will have trouble keeping faster runners inside. He is only average in both zone and man coverage, and often looks stiff in his hips.

Datko suffered a season-ending shoulder injury four games into the 2011 season. He’s a better run blocker than he is a pass blocker, but he has been a starter since his freshman year. He’ll need to build some strength in the weight room, but he definitely has the size to play in the NFL.

Strengths: Datko is fast off the line of scrimmage and immediately fits on his blocks. He is not an explosive mover, but he can stay with his blocks once on them. In pass protection he can struggle at times but usually blocks long enough to get the job done. He makes up for his average athletic ability by being technically sound and understanding how to use his hands and feet to keep defenders occupied. He works hard to keep defenders moving in the run game and, despite his weaknesses, is a “get the job done” player at the end of plays and games.

Weaknesses: Datko can be stiff at times and struggles noticeably with certain movements. While he is an effective blocker, it is usually not pretty. When he has to move a lot, inconsistencies in his play can show up. He does fit on blocks OK, but it is often a struggle for him to get there. He is a catcher as a blocker, but it has served him well up to this point.

Coleman is clearly a developmental prospect. He was a three-year starter for Tennessee Chattanooga after transferring from Tennessee. We’ll see what Mike McCarthy can do with him.

Strengths: Coleman has a quick set-up and plays with a good sense of urgency. He is athletic when scrambling and can get the ball to receivers both in short and long passing situations. He is a leader and makes good decisions. Coleman can really drive the ball and shows NFL-level zip on his throws.

Weaknesses: Coleman has struggled with his route progression and locating second receivers. He is good pocket awareness but can be rattled by pressure. He will occasionally hold on to the ball and take sacks rather than distribute to viable outlets.