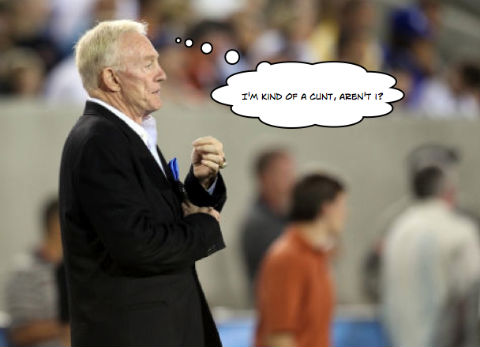 Remember when the Dallas Cowboys got penalized for some vague salary cap infringement a few weeks ago? Yeah, maybe keep that in mind.

Oh, wait… nope. We were mistaken, along with the rest of, you know, anyone that matters. Pretty much everyone thought the NFL might just open their season with Packers at Giants, just like they did with Saints at Packers the year before.

That, however, would make sense and, more importantly, not appease Jerry Jones and his surgically-lifted face.

Either way, one of us motherfuckers knows you can’t stomp us out and you can’t make us run, and I guarantee you that motherfucker don’t have the last name Jones. So, frankly, it’s alright that the Green Bay Packers don’t get their right to stroll into that shithole called The Meadowlands on opening night to avenge their playoff defeat and destroy those shitbags led by Eli.

Anyway, yeah, America would definitely rather see Eli vs. Romo.

At least we’ll all know one team that’s eliminated from the playoffs right away!