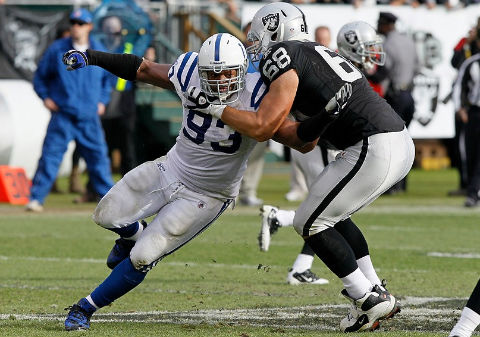 One of the Green Bay Packers top offseason priorities will be improving the pass rush. While we fully expect them to address that need through the draft, there may be some intriguing options available as teams continue to pare their rosters to get below the salary cap.

The top pass rusher on the free agent market, Houston’s Mario Williams, figures to be out of the Packers’ price range. There’s no guarantee either of these guys will be in the Packers’ range either, but we fully expect them to be making less than they currently do if they’re released, which looks like a real possibility.

The most interesting option is Oakland linebacker Kamerion Wimbley. The Raiders have to cut around $20 million to get below the salary cap and Wimbley is scheduled to make $11 million this season. If he doesn’t agree to a renegotiated deal, the team will part ways with him.

Wimbley is 28 and had 63 tackles and seven sacks last season. He has 42.5 sacks in his six-year career and would presumably provide the Packers with something they clearly lacked in 2011 — a pass rush threat opposite Clay Matthews.

The other player to keep an eye on is Colts defensive end Dwight Freeney. Indianapolis just gave $36 million to their other defensive end, Robert Mathis. Freeney, meanwhile, is scheduled to make more than $14 million this season and has a cap number of $19 million, which could make him a cap casualty.

There are some red flags with Freeney — he’s 32 and he’d have to switch to outside linebacker in the Packers’ 3-4. He’s still one of the best pass rushers in the league, though. He had 8.5 sacks last season and 42.5 over the last four. He doesn’t tackle anyone (19 stops all of last season), but he’d be a hell of a situational pass rusher if nothing else.

We’d still consider it unlikely for the Packers to sign either one if they’re released, but if the price is right, you’d think they’d at least consider it.