Packers Show Interest In Someone, Then Do Nothing 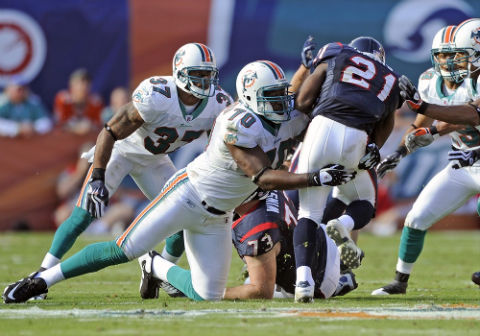 Here’s the news you’ve been waiting for, but thought would never come. The Green Bay Packers have actually shown some interest in someone in free agency.

That someone is defensive end Kendall Langford, who played last season with the Miami Dolphins. The Packers reportedly called his agent.

Yeah, you actually expected them to schedule a visit, didn’t you? Well, get real. If Kendall Langford was good enough to be a Packer, he would have been drafted by Ted Thompson to begin with!

Langford has already visited Cincinnati and is going to St. Louis next, so the Packers probably have no shot at signing him, since, you know, they haven’t even asked if he could hop on a plane to Green Bay.

This is probably the PR move we were talking about earlier. The Packers vaguely express interest in someone just to keep the fan base energized. We’re pretty sure the organization floated the story or told Langford’s agent to float it as a win-win. The Packers look like they’re doing something and Langford has another team “interested” to drive up his price.

All that being said, it would make some sense if the Packers were actually interested in Langford. He’s a classic 3-4 defensive end and he’s only 26. The team needs to do something about a defensive end position that was filled inadequately by Mike Neal, who’s suspended for the first four games of 2012, and Howard Green, who’s a free agent.

Langford isn’t a pass rusher, but he can play the run, which is more than we can say for most of the guys on the Packers defense. Although he had only 20 tackles last season, he had 47 and 43 in 2010 and 2009, respectively. Those numbers are very good for a 3-4 defensive end.

Of course, he’ll probably be making tackles for St. Louis this season, not Green Bay.