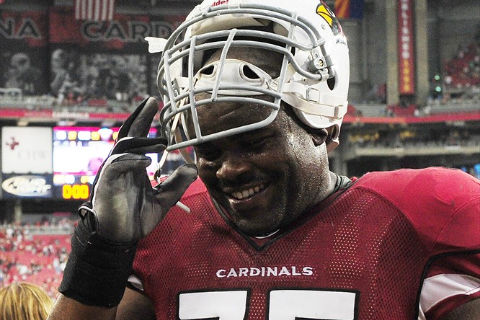 The Green Bay Packers have a big decision to make about who will be protecting Aaron Rodgers‘ blind side next season. The team will reportedly release veteran Chad Clifton, who’s scheduled to make a bunch of money and was largely ineffective when he wasn’t injured in 2011.

That leaves them with two potential replacements on the roster — Marshall Newhouse, who filled in for Clifton last season, and Derek Sherrod, the team’s 2011 No. 1 pick. Newhouse was, uh…. uneven as a starter. Sherrod couldn’t crack the starting lineup in training camp and then broke his leg in December. It’s unclear if he’ll be at full strength when training camp starts.

That brings us to Arizona Cardinals tackle Levi Brown. Like most of the guys we’re talking about these days, Brown will have to restructure his contract or get released. He has a salary cap number of $17 million in 2012, the final year of his rookie deal. If the team is serious about pursing Peyton Manning they’re going to do whatever they can to keep Brown, but he isn’t going to play for peanuts.

If Brown gets released, why wouldn’t the Packers take a look? Even if Newhouse continues to develop, he has a long way to go before he’s a top-tier offensive lineman. Even when Sherrod returns, the Packers won’t know if he’s capable of being a starter for a while.

Brown, meanwhile, is a former No. 1 pick, has started all 16 games each of the last four seasons, is 27 and 6-6, 324. No, he’s not a Pro Bowler, but most football people would tell you he’s an upgrade over any left tackle who’s currently on the Packers roster. Short of moving right tackle Bryan Bulaga to the left side, Jones would be an upgrade to what’s currently the weakest position on the offensive line.

Moving Bulaga presents another set of problems though, like who’s going to play right tackle? And can Bulaga play as well on the left side as he did on the right? In other words, there’s no reason to make the move if the right option is available.

Could that option be Levi Brown? We’ll see.