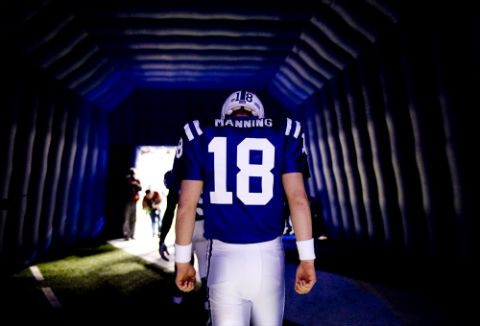 Hell, everyone else is doing it, we might as well too.

Quarterback Peyton Manning getting released by the Indianapolis Colts relates to the Green Bay Packers in three ways.

First, his landing spot immediately alters the balance of power in the NFL. If he signs with a decent NFC team like Arizona or Seattle, the Packers chances of returning to the Super Bowl diminish.

Second, Manning’s destination impacts the Matt Flynn‘s free agency. Miami, where former Packers offensive coordinator Joe Philbin is now coaching, was expected to be in the race for Flynn. So were Washington and Seattle. All three teams will reportedly turn their attention to Manning now, with Miami looking like the favorite. Flynn will still sign somewhere else, but his prospects just got dimmer.

Third, is this thought. Colts fans are probably going through similar emotions today as we were when the Packers released Brett Favre. Even though a lot of us where tired of the circus and Favre’s whiny, selfish ways, we lost someone who helped resurrect our franchise that day. The Colts will lose someone who helped build their franchise today.

After saying all that, let’s handicap the race for Manning.

1. Miami Dolphins — Miami has a solid defense and a decent receiver in Brandon Marshall. They have an offensive-minded head coach, play in warm weather and, hell, they play in the new sports capital of the east — home of LeBron James and Jose Reyes. What’s not to like about the Dolphins if you’re Peyton Manning? The only apparent negative is the competitiveness of the AFC East and the fact he’d be facing New England and Tom Brady twice a year.

2. Arizona Cardinals — Like Miami, the Cards have a solid defense and an even better receiver in Larry Fitzgerald. They have a proven head coach in Ken Whisenhunt and they play in warm weather, which is something you’d figure Manning would consider a positive after playing his entire career in a dome. Although Arizona doesn’t have the ‘it’ factor of Miami, they do play in a much easier division. The biggest question is their offensive line, where they’ll likely have to release left tackle Levi Brown.

3. Denver Broncos — Replace Tim Tebow?! How dare we even bring up the notion?! Let’s be realistic for a moment. Tim Tebow is a joke as an NFL quarterback. Peyton Manning makes this team a Super Bowl contender. They have a good offensive line and their defense gets after it. They can also run the ball. It doesn’t hurt that John Elway is in the front office, either. Coach John Fox will defer to Manning offensively. The only think that sucks for Manning is he has to play in Denver.

4. New York Jets — Yes, they have Mark Sanchez, but don’t think they wouldn’t jump at the chance to add Peyton Manning. The Jets have more talent than anyone on this list. That includes a good defense, solid running game and a receiving corp that features Santonio Holmes and tight end Dustin Keller. The move would put both Manning brothers in New York, which could be a positive or a negative for Manning. The biggest negative going for the Jets is their head coach, Rex Ryan. Can you really see Manning putting up with that dog and pony show?

5. Seattle Seahawks — Sure, the Seahawks are close to the playoffs and they play in the NFC West, but the only reason they’re really on this list is because they’re said to be prepared to throw boatloads of money at Manning. We just can’t see Peyton Manning in a Seattle uniform. It’s not because Seattle isn’t a great city, it’s because of the makeup of the team. Their line is suspect and you can bet Manning, who’s 36, isn’t keen on picking himself up off the turf very often. You have to wonder about their receivers too. Sidney Rice, who’s the best of the bunch, can’t stay healthy. Something tells us Seattle doesn’t have the talent in the right places to sign Manning.