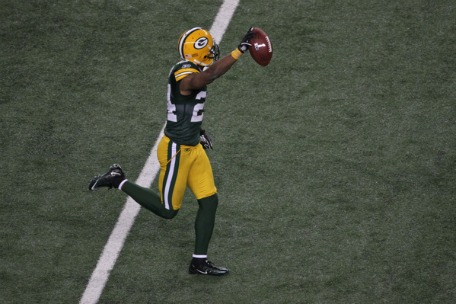 We never thought we’d say this a couple years ago, but Green Bay Packers cornerback Jarrett Bush is in demand.

Bush has already met with the Jets and Cardinals and the Cowboys are also reportedly interested. Teams are presumably looking at Bush as a solid backup on defense and a top-notch special teams performer, which is exactly how the Packers see him.

Does this mean the Packers won’t re-sign Bush? It’s now looking like a good bet. There’s no evidence they’ve made any effort to do so thus far, which is more or less par for the course this offseason.

The team let both Scott Wells and Matt Flynn sign elsewhere without making much of an effort to keep them. They thought Wells wanted too much money and could have franchised Flynn in order to trade him, but opted not to. The only action in Green Bay was yesterday’s visit by center Jeff Saturday, who apparently left town without signing a contract.

If Bush leaves, the Packers will lose their top special teams player. On defense, they lose the guy who ended the season as their nickel back. Sam Shields, who played poorly most of the season before getting demoted, should step back into that role. The Packers would then count on second-year man Davon House to step up behind Shields.

Packers Will Bring In Jeff Saturday

Bush Is Back In The Fold

Bush Is Back In The Fold