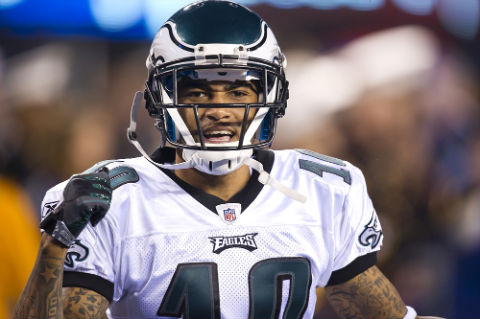 Remember last offseason when everyone, including the Philadelphia Eagles themselves, were crowning the Phildelphia Eagles Super Bowl champs? That idiot Vince Young called the Eagles a dream team and we called them paper champions?

That worked out nicely, to the tune of an 8-8 season filled with pouting, whining and bickering. Now, one of the Eagles has proclaimed something equally as stupid.

Receiver DeSean Jackson, after signing his $50 million deal, went ahead and guaranteed a Super Bowl.

“In one of those years, I’m going to guarantee a Super Bowl. We’ve been so close since I’ve been here the past four years. …The sky’s the limit.

Jackson isn’t the sharpest knife in the drawer, but you’d think he’d have some recollection of last year. And then you’d think he’d keep his mouth shut, but that’s not what the Eagles are about.

No, these Eagles are about making wild proclamations and then going out and shitting right in their drawers. So, for being this year’s Vince Young, we salute you DeSean Jackson.

Previous Article
Dolphins Will Go Hard After Matt Flynn
Next Article
Flynn Wants To Sign With Miami, But Dolphins Are Idiots