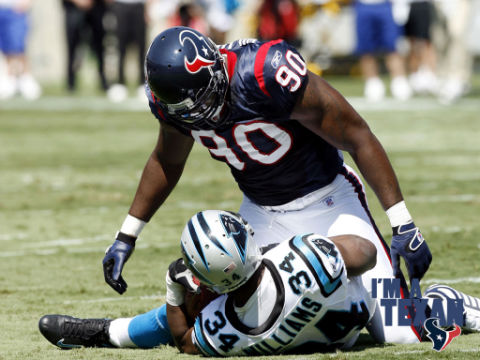 The free agent signing frenzy usually starts to slow down on the third day and thank God. We were about to kill ourselves.

So, maybe now that everyone good is pretty much off the market maybe the Green Bay Packers will get involved. Hahahahahaha! Fat chance! Actually, maybe they’ll sign a couple of their own free agents for a wheel of cheese or something like that. They’ll also probably sit around and watch center Scott Wells sign with Tennessee. They’ve been linked to Houston center Chris Myers, but don’t appear to have a visit scheduled.

Maybe you might want to work on that, eh Ted? You know, at least pretend you’re doing something to keep the fan base energized. It’s just good PR.

Anyway, here are the latest developments.

Defensive end Mario Williams, the top free agent on the market, unless you count Peyton Manning, has signed with the Buffalo Bills. Yeah, that’s not a mistake. Williams will play in Buffalo voluntarily. I mean, it’s not Minnesota, but it’s close. Here’s how it happened. The Bills locked Williams in a hotel room in Buffalo for three days until he agreed to take all of their money. In this case, $100 million over six years, with $50 million guaranteed. In other words, they agreed to make Williams the highest-paid defensive player in history and to end his captivity. He really had no choice. Well executed, Buffalo.

Tennessee added guard Steve Hutchinson, who was released by the Vikings on Saturday. The five-time All Pro is 34, but still got a three-year contract. The move is seen as a way of enticing Manning to sign with the team. Hutchinson and Manning are close friends.

The Cowboys continued to throw money around, signing linebacker Dan Connor. We don’t really know much about the deal, but then, we don’t really care either. In four seasons, Connor has started only 19 games. Last season, he had 75 tackles in 15 games (11 starts). He does not rush the passer and he does not create turnovers.

The Kansas City Chiefs have a new running back. They signed Peyton Hillis to a one-year deal worth $3 million. Remember when this asshat was on the cover of Madden and then had the typical post-Madden-cover season that involved injuries, whining and shitting the bed?

Chad Henne is staying in Florida. The quarterback is moving from Miami to Jacksonville, where he’s expected to push Blaine Gabbert. Henne got a two-year contract.

Previous Article
Clusterfuck Update 3/14: Wells In Tennessee, Browns In On Flynn
Next Article
Packers Show Interest In Someone, Then Do Nothing