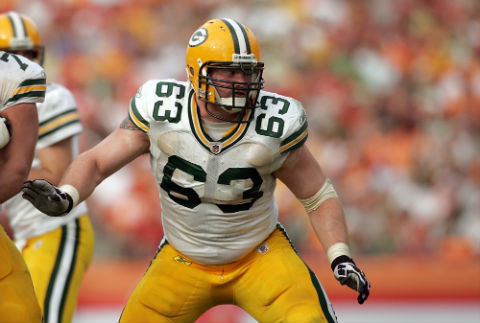 Free agency, or as we like to think of it — the NFL’s annual clusterfuck, began Tuesday and as always, several teams were quick to throw a bunch of money around.

Here are the notable signings from Tuesday, along with a look at the news on the Green Bay Packers free agents.

The Packers are expected to lose center Scott Wells, who’s looking for more money than the team is willing to pay. On day one, Wells’ name wasn’t mentioned once by anyone. That is, at least that we noticed. It could be a sign that the Pro Bowler overvalued himself. Then again, it could just be a sign that teams don’t really care about signing a center the first day of free agency.

As for potential replacements, there was another report the Packers are targeting Houston’s Chris Myers, who was also a Pro Bowler this past season. Unfortunately, the Texans and Titans appear to be the only teams he’s spoken to.

As for the the Packers’ free agent who was supposed to be the most coveted, quarterback Matt Flynn is reportedly only drawing interest from the Dolphins. The problem there is, they’re waiting around for Peyton Manning to make a decision on where to play. There were early reports the Browns were interested, but those were debunked. At the moment, the market for Flynn isn’t as strong as expected. That could change once Manning chooses a team, but if he picks the Dolphins, Flynn’s only option may be Seattle. At the moment, we have no evidence the Seahawks have been in touch.

Meanwhile, the Chicago Bears added a valuable piece by signing Jason Campbell to back up Jay Cutler. He only got a one-year deal, which is probably a sign he wants a chance to start somewhere else next season, but is a big upgrade over Caleb Hanie. After Cuntler got injured last season, Hanie pretty much screwed up any shot the Bears had at the playoffs.

The Buccaneers, who were a joke last season, struck early and went big, signing the best receiver on the free agent market — Vincent Jackson. The Bucs threw more than $10 million per season at Jackson. His contract is reportedly worth $55,555,555 over five years. Of that, $26 million is guaranteed. Jackson is good, but this is a perfect example of some idiot GM overpaying for a free agent who probably will never live up to his paycheck. Really, if Jackson isn’t a Pro Bowler four of the next five seasons he doesn’t deserve this contract.

San Diego, which lost Jackson, compensated by signing Robert Meachem, who was previously with the Saints. The Chargers gave Meachem $25.9 over four seasons. Meachem doesn’t have the stats Jackson does, but brings a different element. He can stretch the field, which is something San Diego hasn’t had. We suspect whoever the Bolts line up at receiver will look good as long as Phil Rivers is behind center.

Receivers were in vogue on opening day. No one really expected this move, but Reggie Wayne re-signed with the Colts. Indy gave Wayne $17.5 million over three years. It was expected he’d sign elsewhere after the team released Peyton Manning. Wayne wasn’t the top receiver on a market seemingly loaded with good pass catchers, so he probably took the first decent offer he saw to avoid waiting around.

The first big defensive signing was made by the Rams. St. Louis signed arguably the top free agent cornerback, Cortland Finnegan, for somewhere in the neighborhood of $50 million for five seasons. This connection isn’t surprising. Finnegan rejoins his former coach with the Titans, Jeff Fisher, in St. Louis.

Previous Article
Mike Neal Suspended
Next Article
As It Turns Out, Bears Probably Traded For Another Scumbag