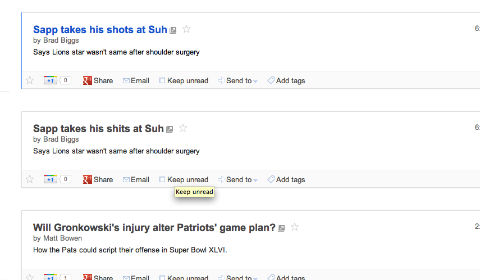 As I was trolling around this morning looking for something remotely related to the Green Bay Packers or at least one of their shitty NFC North rivals, I came across this in my RSS reader.

You’ll want to take note of the second headline: Sapp takes his shits at Suh.

The story is, of course, referring to that one scumbag who used to play for Tampa, Warren Sapp, who’s currently an analyst of some sort and Detroit Lions scumbag Ndamukong Suh. Apparently, scumbag No. 1 doesn’t like scumbag No. 2 or something, so he decided the best thing to do was take some shits on him.

Actually, that would be pretty awesome, now that we think about it. Might even pay to watch.

Anyway, this was published by the National Football Post, which then presumably fired their copy editor and reposted the story with the headline you see above it: Sapp takes his shots at Suh.

Good work, fellas! Reminds us of the time the Press Gazette shit the bed before the NFC Championship game last season.