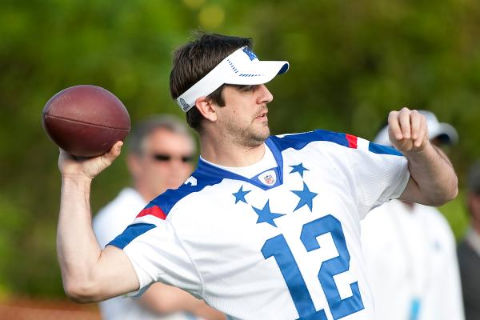 NFL commissioner Roger Goodell said Sunday he was disappointed in the quality of the Pro Bowl and the league may consider eliminating the game.

Good riddance. We haven’t watched the Pro Bowl in years because the game itself is a joke. It’s boring and is held at a point in the season when fans just want to see their teams play, but instead get a watered down all-star game while they’re waiting for a Super Bowl matchup they probably don’t care about. It’s also hard to call the Pro Bowl a true all-star game, since the players in the Super Bowl don’t play and seemingly a third of each roster drops out for “injury” or other reasons, only to be replaced by guys who probably have no business being there.

This year’s Pro Bowl was marred by fans in the stands booing the players and Green Bay Packers quarterback Aaron Rodgers chastising teammates for not putting forth any effort.

“We’re either going to have to improve the quality of what we’re doing in the Pro Bowl or consider other changes or even considering eliminating the game if that’s the kind of quality game we’re going to provide,” Goodell said.

“I know players love to be in Hawaii but we have to start with the quality of what we’re doing,” Goodell said. “If the fans are responding negatively to what we’re doing, we better listen. And that was my message.”

So what to do?

Obviously, the game can’t be moved to midseason like the other major sports’ all-star games because of the injury risk. There are players, especially pending free agents, who say they don’t go hard in the Pro Bowl because they’re worried about their next contract and rightfully so. Why risk millions of dollars in a meaningless game?

The problem is, there’s no way to make the Pro Bowl meaningful.

Baseball puts home field advantage in the World Series on the line, but that can’t be done with the Pro Bowl because of when it’s played and the fact the Super Bowl is held, in all probability, on a neutral field.

The NHL has experimented with a North America vs. The World format and, more recently, they’ve let designated captains choose their teams playground-style. Both are interesting concepts, but the first one wouldn’t work for the Pro Bowl because the NFL has hardly any foreign players. The second might make the game more interesting, but it isn’t going to stop anyone from dropping out or mailing it in.

So what to do with the Pro Bowl?

We don’t see any way to salvage it, so get rid of it. The NFL should still elect Pro Bowlers as they do now by letting fans, players and coaches vote, but they don’t need to play the game.

The league can easily move their new awards show, which was held for the first time Saturday night, up a weekend to fill the time. It will probably even be more popular. Who doesn’t like to see people get awards and watch highlights?

It’s sure as hell a more appealing option than watching the Pro Bowl.

Here’s To A Lackluster End To The Season!

Here's To A Lackluster End To The Season!