NFL Could Expand To 34 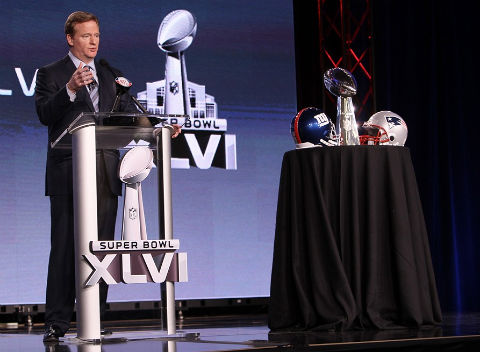 Commissioner Roger Goodell, speaking on the possibility of the NFL returning to Los Angeles, said the league could expand to 34 teams, Thursday night.

It’s known the league wants to return to the nation’s second-largest market and there are currently two stadium proposals on the table. There’s been speculation a team that can’t get a new stadium in their current market, like San Diego or Minnesota, could move to Los Angeles, but the commissioner reiterated the league isn’t interested in that.

Goodell also said the NFL wouldn’t add a single team, which would bring the total number of franchises to 33.

Appearing Thursday night on “Costas Live” on NBC Sports Network, Goodell said the league “doesn’t want to move any of our teams.”

“We probably don’t want to go to 33” teams by adding just one new club if a suitable stadium is built in the Los Angeles area, Goodell said. Instead, the league would consider adding two. An odd number of teams would pose scheduling problems, including at least one club being off each week, and would create one division with five teams.

Before anyone gets too excited about more NFL teams, it should be noted Goodell also said the league hasn’t considered expansion, nor do they have any plans to do so.

In addition to San Diego and Minnesota, teams that have been mentioned as candidates to move to Los Angeles include St. Louis, Jacksonville and Buffalo.